12 best features in Android 8.1 Oreo to get you excited!

12 best features in Android 8.1 Oreo to get you excited!

Google strives to make improvements to Android with every new version, and Android 8.1 Oreo reflects this. Android 8.1 Oreo offers many exciting features. We have listed our top 12 of these new features below:

Google has worked hard to make the settings menu smaller in Android, meaning you will have to scroll less to see all the options. Additionally, the settings menu is more nested. This basically means the different options are categorized to reduce the menu size vertically. 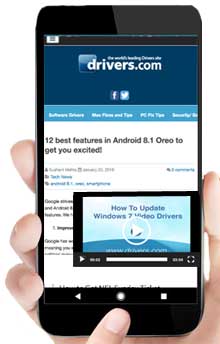 For example, you will not find different options for WiFi hotspot, mobile networks, tethering, data usage, VPN, and airplane mode; all of them are grouped into one category – Network & Internet.

Though you have to dig into the menus, the categories make the settings menu look more refined, and systematic. Besides, Android Oreo also has a Quick settings menu where you can find most accessed settings. This reduces the need for delving into the main settings menu again and again.

Malware and spam apps are an unfortunate reality and a huge threat to privacy and data stored on the Android phone. Google has introduced a new safety feature known as Google Play Protect that tracks the suspicious activity of apps installed on your phone.  It not only scans apps when you download them from the app store but also supervises the functions of the app. If it finds any app that is harmful, it will give you a notification and an option to remove the app in question.

With Android 8.0, you can continue watching videos while working on other apps. If you want to use another app while watching the video, just tap on your home screen and open the app. The video screen will float and stick to any one side of the screen while the newly opened app gets a bigger screen area, meaning that this new PIP (picture-in-picture) feature allows entertainment and work to go hand in hand.

The Neighbor Aware Networking simplifies the sharing of data between two Android devices. With Android 8.0, your device can connect with other compatible devices directly. To exchange files, you need to connect through a central access point or use the same WiFi network. The NAM (Neighbor Awareness Networking) features will come in handy to play games and share applications.

Never underestimate the selling power of emojis! If you are a fan of emojis like the ones used in Facebook Messenger or the Whatsapp mobile app, then you will have reason to rejoice! Google has finally said goodbye to blob emojis and with Android Oreo, you get new round emojis popular in online chats and communication. The circular emojis on Android Oreo are not only more refined but the number of emojis has also increased.

The humble copy/paste feature in Android has undergone a radical change; it now integrates machine learning technology. The phone can now understand the text you want to select and does it all by itself.

The same goes for the address, if you select one word of the address, the smart recognition technology goes ahead and copies the complete address to the clipboard, ready for paste. Android users would love this new feature which makes text selection so much easier.

Earlier Android users had to turn their WiFi on or off when moving places. If you left your WiFi on, the phone would scan for open WiFi hotspots constantly, causing a huge battery drain. If you kept WiFi off, you would have to manually turn it on upon reaching your home or office. This has changed with Android Oreo and the phone will turn on the WiFi automatically when you reach your home or office.  In other words, Android Oreo can instantly recall the locations where you have accessed WiFi in the past and uses that information to switch “On” the WiFi automatically.