3 ways your iPhone can change your life

3 ways your iPhone can change your life

(Or at least make it a lot easier!)

The best advice I can give here is, whatever your misconceptions or preconceptions, just start using Siri now. As Siri comes to recognise and understand your voice you may have a few frustrating moments but stick with it! If you invest a little bit of time getting used to Siri and vice versa – it will all be worthwhile.

Whatever you have thought of Siri in past, it opens up a world of possibilities that can be tailored to your precise needs. It’s not quite a voice-activated personal assistant, but it’s about as close as you are going to get!

Siri is still perhaps one of the most under-used and under-appreciated features of the iPhone. Most users are put off by past experiences of repeating ‘call home’ dozens of times to the unchanging and increasingly-frustrating response ‘I cannot find hum in your contacts …’! Siri has come a long way from that and the more you use it, the more it comes to know and understand your voice.

Siri was introduced as a feature on the iPhone 4s back in 2011 and has been fine tuned with each iteration since. Siri is most useful when trying to access data on the go (such as ‘read my most recent emails‘) or quick reminders you many not have time to manually type in (such as ‘remind me to put dry cleaning in car when I get home’), the latter will use Location Services in conjunction with your Reminders to issue an alert to you when you reach home (assuming Siri knows your home address, otherwise you will need to specify this).

Allowing ‘hey Siri’ enables true voice-activation so that, when plugged in, simply saying ‘hey Siri’ will activate Siri. Previously you had to hold down the home button for a couple of seconds.

To enable the ‘Hey Siri’ feature, go to

You will need to take a couple of minutes to train Siri to your voice by repeating a few simple commands. This doesn’t take long and is well worth setting up to allow you to use this feature.

You can then test this by plugging in your phone and saying ‘hey Siri, remind me to feed the dog at 6pm’. Sir should then confirm that this is being added to your reminders.

I seem to spend half my life typing these days so am happy to try anything that will help with repetitive tasks like typing texts and reminders.

‘Hey Siri’ or just plain old Siri if you don’t have this feature enabled,  is great for sending off a quick text.

How to use Siri to save time

The example below will demonstrate how you can save 5-10 minutes of opening and closing different apps and adding text, with three simple voice commands. Look at the example below:

“remind me to get groceries when I leave work”

If you are not using Siri already, start now and be patient – there can be a few hiccups in the begging but it will all be worthwhile! 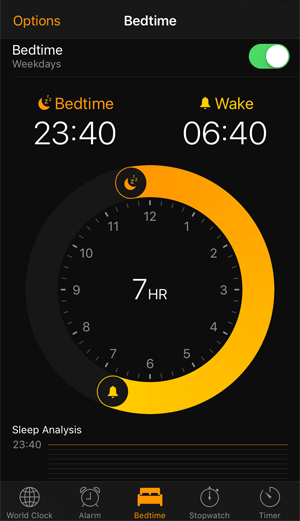 iOS 10 introduced a new Bedtime feature which enables users to customise alarms for both going to sleep and waking up. These alarms are configured in Settings > Clock > Bedtime. A very useful aspect of this new feature is the visual representation of your sleep/ wake pattern  (assuming you are obeying your iphone alarms and going to bed and waking when told!)

Create your own lullaby playlist and use a combination of the Equalizer (EQ) function and the Clock Timer to control the levels and duration of the music you are listening to while you gently drift off to sleep. The Equalizer Function has a Late Night mode that controls the audio output of songs, essentially ‘toning down’ louder sections of music thus making it more soothing for night-time listening. This feature can be accessed by going to Settings > Music > EQ > Late Night.

If you want to set a time to turn off your music after a certain length of time, then use the Timer feature found under Clock > Timer, set the time to say 15 minutes and then scroll down and select ‘stop playing’. This will stop the music after the specified duration, by which time you will hopefully have been gently delivered to the land of nod!

This can also be a very useful feature with babies or small children, using either music or audiobooks.

3. Make your phone YOUR phone: personalize and customize

Most people use there phones for pretty much the same tasks every day, calling, texting or emailing usually the same 4 or 5 people every time, taking photos, accessing music and creating/ checking calendar events. The iPhone is a very customisable phone but very few people choose to make the few changes required to make their day-to-day life so much easier.

For example, wouldn’t everyone love a personal assistant who fields our calls and only alerts us if the call is from someone we deem important enough to interrupt our well-earned lunch-break? The ‘Do not disturb’ feature allows you to do just that. You can set it to block call alerts between say 1pm and 2pm unless the call is from someone on your ‘favorites’ list. This feature can be customised to your needs and is something everyone should use at least once in a while! To access this feature go to Settings > Do Not Disturb.

You also probably send the same text or email a number of times a week saying something like (or at least containing the phrase) ‘on my way’, ‘where are you?’ or ‘will call you later’. You can add a ‘shorthand’ to these and any phrase you choose using the Keyboard Shortcuts feature.  To use this feature you simply define the phrase and the shortcut to that phrase so that when you type for example, ‘wcul’, the auto-correct feature will show ‘will call you later’ allowing you to insert the text without all the laborious typing. Another few minutes saved! To access this feature go to Settings > General > Keyboard > Add New Shortcut. 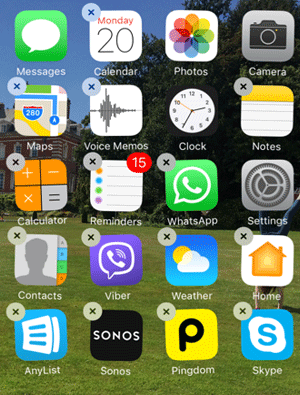 Something everyone should do is to customise their home screen. Most iphones are a clutter of app icons spanning 3, 4 or 5 screens. Why not move your most used apps to the first home screen so you don’t have to swipe every time you want to use said app. To move apps around, do the following:

You should do this with all the apps you wish to order, cusomtising your home screen like this should make it much easier to find the apps you need, when you need them.

In many ways we have become slaves to technology but we can take back some of that control by using our iPhones more effectively and making technology work better for us. If you have any tips for making better use of your iphone, please post them below.