How to choose a Graphics Card

There are many factors to consider when selecting a Graphics Card to suit your needs. Graphics Cards are usually purchased for gaming purposes/graphics demanding programs, hence the following factors need to be considered when choosing one:

GPU is the number one factor when it comes to selecting a Graphics Card. Similar to the CPU, the GPU has many cores which the card uses to its maximum potential when processing images. The speed of the cores is measured in Clock Speed.

This measures the speed of the cores in Gigahertz (GHz) or Megahertz (MHz). This is the speed at which cores process per second. Generally, the faster the Clock Speed, the higher the number of instructions executed.

This memory is needed to access and draw its images. You need to have sufficient memory in order for games, or any graphics demanding program, to process and display the images on screen. Bottlenecking is a problem that either stops or slows down the transfer of information. This is usually caused by insufficient RAM of the GPU. To bypass the problem, adequate RAM is necessary.

Bandwidth
This tells you how fast the card can access the card’s memory. The higher the Bandwidth, the faster the card will be able to fetch the data and graphics from the memory.

Bus Width
This processes the memory and controls the amount of data transferred. A lot of Bus Width is needed if a lot of memory is used to transfer data to and from RAM.

Clock Speed
This is the rate at how many times the RAM can be accessed each second. The faster the Clock Speed, the less time it will have to wait.

These terms all mean one thing and refers to the number of cores on a Graphics Card. They handle most of the tasks of rendering images and finalising them onto the screen. They carry out many rendering effects and have many types of Shaders. AMD refers to their Shaders as “Stream Processors” and Nvidia refers to them as “CUDA Cores”. Adding more cores ultimately increases the overall power of the GPU.

How do I check the Graphics Card in My Computer?

1. Go to your desktop and right click, the following should appear on the screen 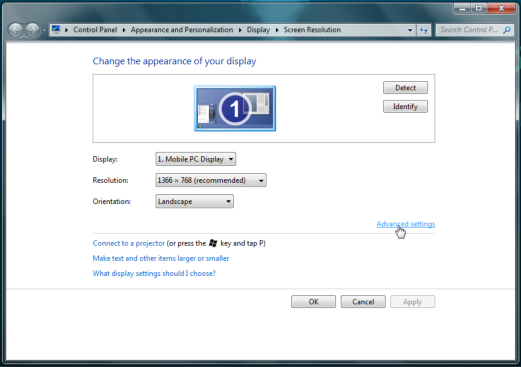 2. Click on “Screen Resolution” and a new window should appear on the desktop

3. Click on “Advanced Settings” which will prompt another window to open 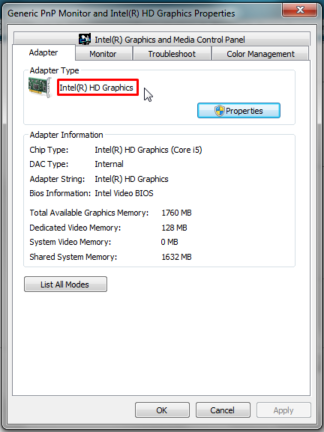 This should tell you the type of Graphics Card your computer is currently using.

1. GPU is the chip and it is situated on the hardware called the Graphics Card.
2. Integrated Graphics are suitable for everyday tasks whereas Discrete Graphics are necessary for high-end usage.
3. Selecting a Graphics Card which is required for high graphics performance involves considering a few major factors; GPU (Clock Speed), RAM (Bandwidth, Bus Width, Clock Speed), Shaders (AMD or Nvidia).